"Who has not heard of Cato Alexander!? Not to know Cato's is not to know the world." This is a quote from 'A scene at Cato's' by playwright, author, and actor William Dunlap (1766-1839). Cato Alexander (being his slave name of course) was a pioneer Bartender/Mixologist. He was the first African-American celebrity bartender, and he was AMAZING at what he did! Cato was a slave in South Carolina that mastered cooking and was able to earn enough money from being a chef to buy his freedom. He moved to New York where he ran a tavern and inn suitably known as simply "Cato's". 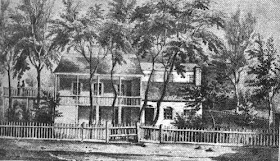 Aside from his cooking Cato was famous for his drinks, especially his punches (New York brandy-punch, his Virginia egg-nogg, and South Carolina milk-punch), his world famous Mint Juleps, his Gin-toddy, and many say he is the originator of the term (and drink)Cocktail - the first non-American record of the word was from Cato in 1833. To spend time at Cato's was always a great time. People traveling from all over the world would make their way through his warm and inviting doors to partake in his amazingly crafted libations and fare as well as enjoy the company, to dance and listen to tunes. One of his famous regulars was famed Irish comedian Tyrone Power (1795-1841). "For Cato is a great man, foremost  amongst  cullers of  mint ,
whether julep  or   hail-storm, second to no man as a compounder of cock-tail, and such a hand at gin-sling" Power states.

Cato's Tavern was located about 4-5 miles from city hall in New York City. Cato had a very elite clientele and circle. Though he was a freed slave he still experienced the ugliness of racism and prejudice. Many whites were bitter towards the idea of blacks being "equal", and many whites violently fought against blacks that had social and economic mobility. Two such men were brothers George and Andrew Luke. One cold night in January of 1831 they, along with chains, whores and an angry mob set out to attack Cato and his establishment. They used a woman pretending to be sick and faint at the tavern's door as a ruse. Cato brought this women inside the tavern to help her and as he was closing down for the night she unlocked the door and they came in and brutally attacked him and his pregnant wife, Eliza, and destroyed much of the property. It was difficult, but he was able to bounce back and Cato Alexander ran Cato's for almost 48 years.

Happy Black History Month and thank you Cato Alexander! You were a spirited and  culinary genius and a true founding father of the craft that I (we) work so hard to maintain and advance! Cheers to you!
Miss Libation at 7:08 PM
Share